Clinical trials have demonstrated the effectiveness of NeuroStar® TMS Therapy in treating patients who have not benefited from prior antidepressant medication. NeuroStar TMS Therapy was studied in adult patients suffering from Major Depressive Disorder, all of whom had not received satisfactory improvement with previous treatments.

An Effective and Durable Option for Treating Major Depressive Disorder

In an independent, randomized, controlled trial funded by the National Institute of Mental Health, 307 patients were treated with the NeuroStar TMS System for 4 to 6 weeks, similar to real clinical context.1

Patients were divided into two groups: 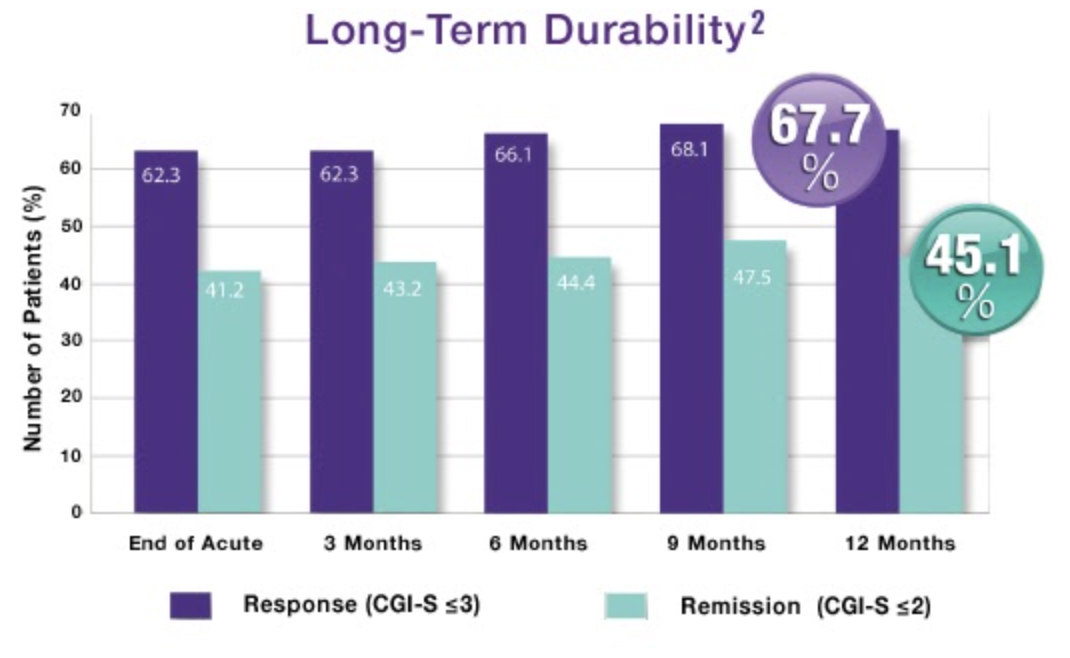 At the end of their treatments, patients who had received NeuroStar TMS Therapy were four times more likely to achieve remission compared to patients receiving a sham treatment. 1 in 2 patients experienced significant improvement in their depression symptoms and 1 in 3 experienced complete remission. Patients treated with the NeuroStar TMS System also experienced significant improvement in anxiety and physical symptoms (such as appetite changes, aches and pains, and lack of energy) associated with depression.1

NeuroStar TMS is the only TMS system with the durability of its effects established over 12 months.

In a trial with physician directed standard of care, meaning Neurostar TMS Therapy could be used in conjunction with antidepressants as needed, patients who had received treatment then reported their symptom levels at 3, 6, 9 and 12 months to determine the durability of their treatments. By the end of the 12-month period, 2 out of 3 patients who had either responded or completely remitted after TMS treatment remained at the symptom levels they reported at the end of the treatment phase.1

After the end of the treatment period, only 1 in 3 patients needed to come back for maintenance TMS sessions, or ‘reintroduction,’ during this 12-month period.1

Additionally, Neuronetics has developed a new tool to use in educating patients on the best practices of treating depression. The Best Practices Treatment Guideline for Depression has been developed to help patients understand TMS Therapy as an option if their first line antidepressant medications stop working. This guideline is based on the 2010 American Psychiatric Association’s practice guidelines and NeuroStar TMS Therapy indication for use, which says:

NeuroStar TMS Therapy is indicated for the treatment of major depressive disorder in adult patients who have failed to achieve satisfactory improvement from prior antidepressant medication at or above the minimal effective dose and duration in the current episode.

NeuroStar TMS Therapy has not been studied in patients who have not received prior antidepressant treatment.

TMS+YOU is an online community and national patient advocacy site for TMS Therapy. Those considering Transcranial Magnetic Stimulation can connect with patients who have had the treatment to answer questions, share insights, and get the latest information.